Delivery has just been made of 1000 copies of 'Working the Sea', a documentary looking at the fishing and coastal heritage of Sidmouth.

The 40 minute film tells the story of Sidmouth's fishing heritage by following one resilient family, the Bagwells, from the war years onwards through romance and tragedy. As the women in the family pick up the pieces, it also weaves contemporary users of the coast (from the lifeboat to the sailing club) into the narrative. Ultimately this is a film about community spirit and how a mutual love of and respect for the sea draws people together.

We were contacted by Louise from the Sidmouth Coastal Community Hub after the film had been finished. She wanted to replicate a run of DVD's in time for the upcoming Sidmouth Folk Week event where they would be premiering their new documentary for the public.

We were sent the finished film along with three other short films that tie in with the local fishing community and artwork assets.
From this we designed a DVD cover, DVD disk artwork and also the DVD menu. Once approved we created a master copy of the DVD and sent the cover/disk artwork along with the master DVD files to the factory for replication.

The DVD's were delivered on schedule ahead of Sidmouth Folk Week and we believe that the event was a success.

"Just a quick one to let you know the DVDs were delivered to my house today. They look great – cover works really well – thank you for turning it around and being so responsive." - Louise, - Sidmouth Coastal Community Hub

Louise also sent us a couple of photos of the finished products from the factory - shown below. 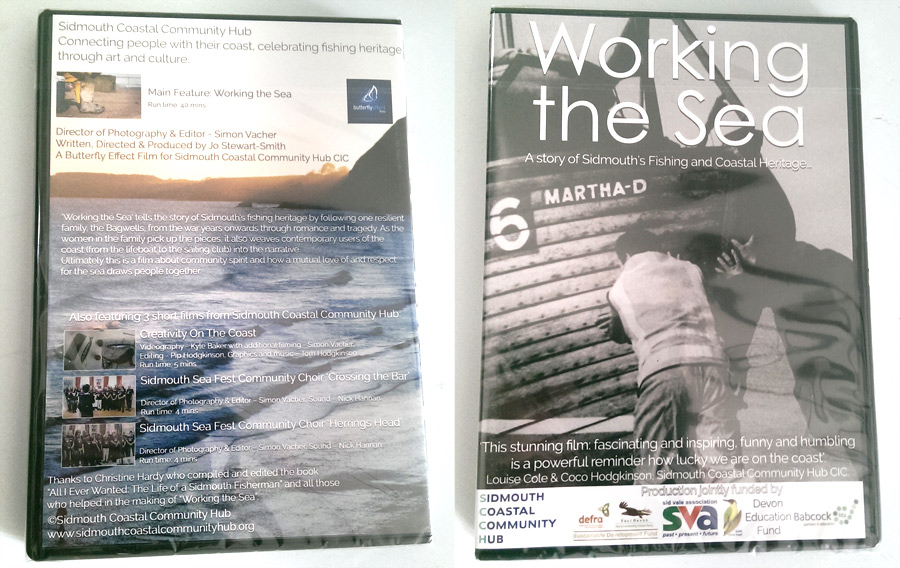