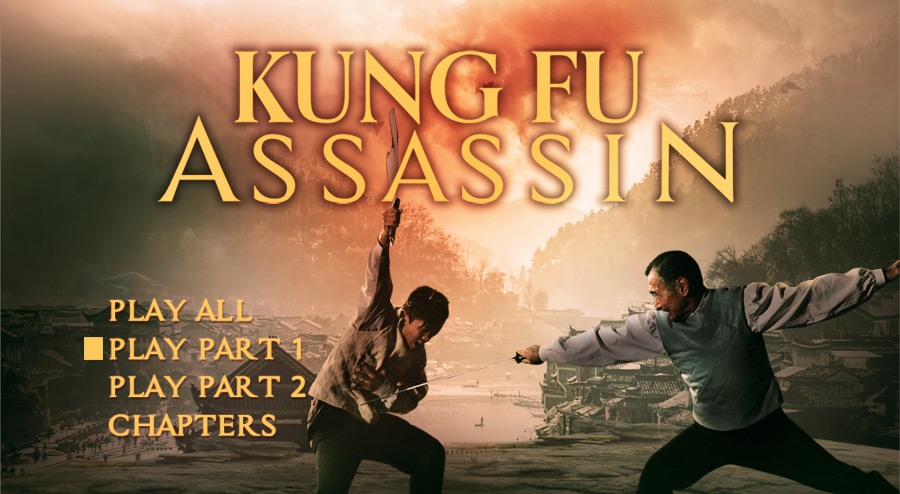 The following is a brief synopsis: 1929. China is in unrest, as the Republic falls prey to Warlords like Kahn Xin, who holds an entire province hostage to the opium trade--and destroys all who oppose him. Only the revered Wudang monks dare stand in Kahn's way in order to protect the very soul of China. Among them is the Westerner, White Crane (Golden Globe nominee David Carradine, Kung Fu), a spiritual master of the martial arts and protector of the innocent. Revenge is not in Crane's heart--until a mercenary army storms the temple and slaughters the beloved female Grandmaster Myling. Out of the ashes of the temple ruins, Crane rises--with vengeance in his heart.

The DVD contains both parts of the mini series, each with a 90min durantion. Originally boradcast on Spike TV as 'Kung Fu Killer, it is now being released in 2016 in the UK by Three Wolves

We were supplied a copy of both films along with newly deisgned cover artwork, from which we were able to design new DVD menus for the authoring. We converted the film assets before importing them and the menus (including a main menu, animated logo screen and multiple chapters menus) into the authoring software and built a master DVD.

As the film already has a BBFC certification, we did not need to re-submit it and the files were to Sony for replication and distribution to retail stores. It will be available to buy in stores in early JUly.