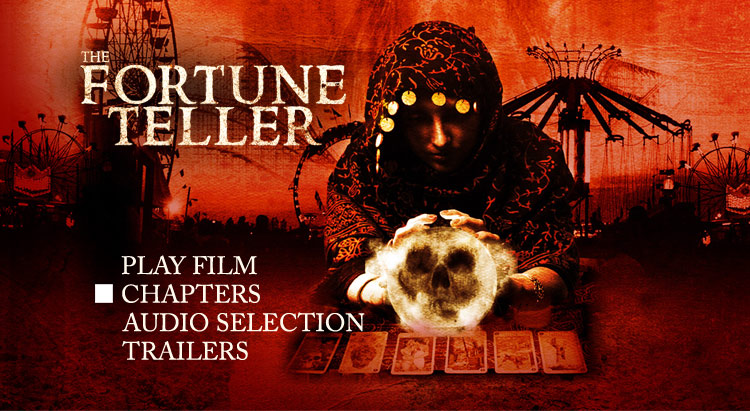 Maniac Films have just authored a DVD release of The Fortune Teller - a supernatural horror film about a widow who is terrorised by an entity in her home.

The film tells the story of Samantha, an actress who is employed as a fake Fortune Teller, but is thoroughly sceptic about all things supernatural - she certainly doesn't believe in ghosts. But when a distressed client comes to her for help, she accidentally releases an entity, which follows her home. Alone in her house, she is about to learn that there are dark forces that don't care whether she believes or not.

Paranormal Attack was originally released under the title 'The Visitant', and we have previously re-branded this film as 'Paranormal Attack'. For the films third release it has been re-titled as 'The Fortune Teller'. To do this Stu had to create a new graphic for the title, that he could use to cover the original title in the films opening sequence. Stu also created a new title plate for the end of the film and for the trailer that appears on the DVD.

We were supplied a copy of the film along with the trailer, 2.0 stereo sound and 5.1 surround sound. We were also supplied with the new cover artwork, from which we were able to design new DVD menus for the authoring.

Stu stripped out the 5.1 surround channels from the video file to build a new 5.1 surround mix, and encoded the film with a 2.0 stereo track. We then took the converted assets, menus (including main menu, chapters menus and audio selection menu) and built a master DVD.

Once the master disk was approved we uploaded the files to Sony for replication and distribution to retail stores.