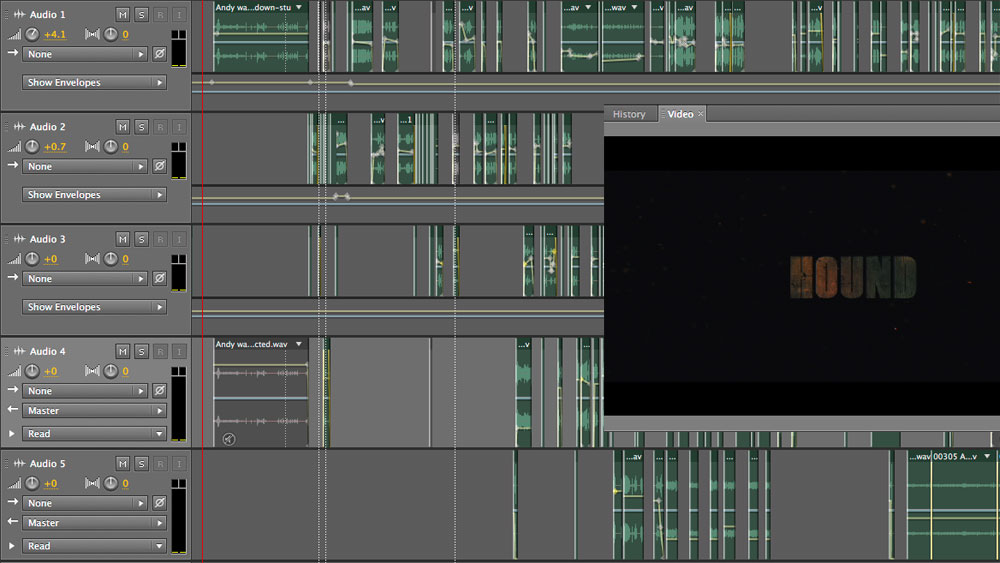 We have just completed the sound mix for a new feature film called HOUND, directed by Simba Masaku.

The film tells the story of Andy, one of many tortured souls living in the shadows of sunny London suburb, Hounslow. An introverted, alcoholic loner, Andy is forced to witness his only friend butchered before his very eyes - his faithful dog. Pushed beyond breaking point by local crime lord Raj, Andy overcomes his addiction and transforms his life through mixed martial arts and tactical skills. To seek justice and find redemption, he forges a new identity; Hound.

The film has already been edited by Jimm Stark (who also plays Andy/Hound in the film) and he's done a great job. However he has asked us to carry out a final mix on the audio for the film before its release.
Stu has been working on the project, mixing the sound in Adobe Encore. The bulk of the work has been mixing the audio levels, ensuring that the dialogue is clear while maintaining the atmosphere of the scenes. There are a lot of gunshots in the film which required attention to ensure that they still had an impact while not overloading the levels.
Some scenes had a lot of background noise (a normal hazard when filming outdoors in London) including planes flying overhead. Stu carried out as much clean-up as possible without degrading the dialogue.

The film was originally funded via Kickstarter in 2014 and shot in 2015. The aim was to release the film in early 2016 but delays have meant that it's been held off until 2018.

HOUND was shot in around Hounslow and was filmed in 31 days. During filming, location shoots had to be changed at last minute as well as actors dropping out and having to be replaced a day before certain shoots. A lot of the shoot days would run from 8am right up until 3am, filming multiple scenes in a day.

The final audio will be synched to the video master and delivered back to Jimm on a HDD.