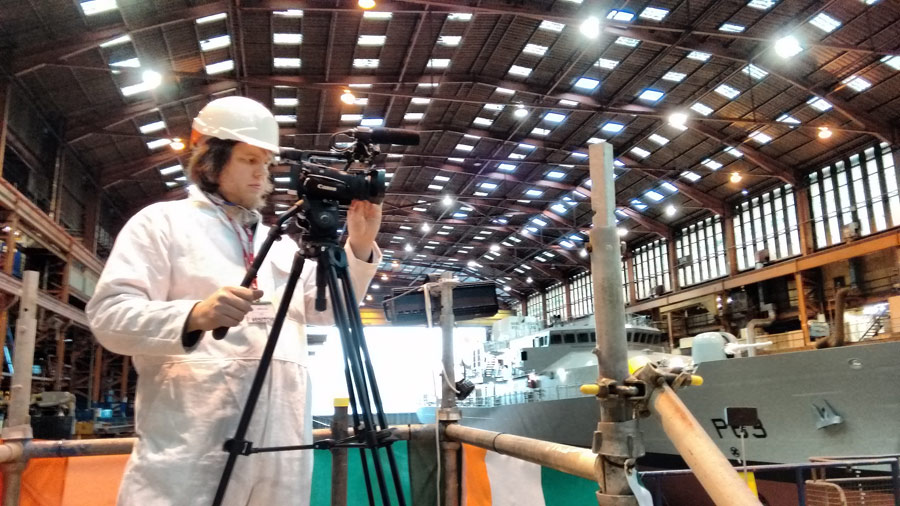 Stu spent yesterday afternoon at Babcock Marine in Appledore, where for the last 9 months, the shipyard has been building the newest addition to the Irish Navy fleet - The William Butler Yates. The ship is a 90 metre long offshore patrol vessel and is also the 3rd of three identical ships that have been built at the shipyard for the Irish Navy.

Stu was working with Matt from Artaura Productions, who has been filming the construction of the ship over the last 9 months.

They were filming the official 'float-up', a ceremony in which the dry dock is flooded and the ship floats for the first time. The event was attended by the Irish Minister of Defence, the Irish Navy Admiralty and a number of top ranking officials.

Stu's task was to operate two cameras and monitor the live audio recording from the rostrum mics. Meanwhile Matt was manning a 3rd camera and a 4th was left unmanned on a wide angle. The shoot was different from many as the shipyard remained a working environment until 45mins before the ceremony, so had to film and set-up as huge 100tonne cranes worked overhead and welders were working nearby.

For the shoot, Stu used the Sony PMW-200 and Sony A7S II cameras, along with tripods and various other items.

Unfortunately the winds were so strong on the day of the float up, that it was not considered safe to tow the ship out of the dock, so the dock was not flooded until the next morning tide, however the rest of the ceremony was duly carried out, including a blessing by a priest.

The ship has now been moored at a nearby tidal dock, where crews will add the radio tower and finish the electrics before sea trials begin.

Matt will now edit the footage in to a promotional film for the Shipyard, which they can use in bids for any future projects.