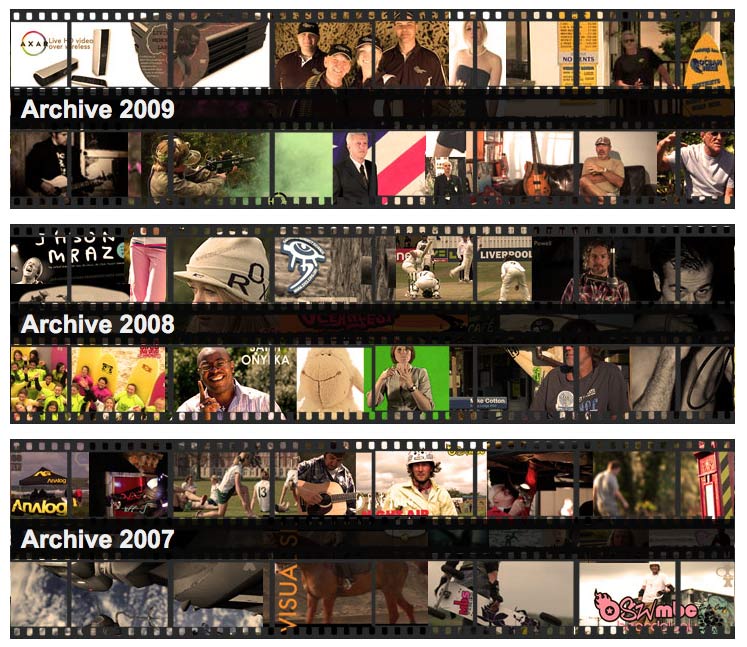 The Maniac Films video production archive is back online for years 2003, 2004, 2005, 2006, 2007, 2008 and 2009. Click here for the main archive link or follow the Archive link in the footer. Mark started working in video production at the end of 2002 and spent a lot of 2003 in Fiji, Australia and New Zealand learning his craft in the sunshine down under, filming windsurfing and kitesurfing and surfing amongst other sports. 2004 saw the start of filming in Scotland for the Half-Life documentary, Goldcoast Oceanfest in Croyde, World Rally championships in Wales, Promos for Pointbreaks watersports, Creation fest in Woolacombe along with the start of The Universe Inspectors documentary - was it really that long ago!!

2005, saw us making multi camera live music filming with Scouting for Girls in London, a feature length multi-camera action sports and music documentary of the Goldcoast Oceanfest in Croyde covering all the beach sports and featuring all the music at the festival. A few campaigns films for Surfers against Sewage, a how-to installation DVD guide for Yelofin broadband wifi, more Creation fest promos and live event filming and local surf films amongst other stuff.

2006 saw us multi-camera filming live music gigs for the Liquidators, The Universe Inspectors, The Breaks, Up Down Left Right Fire, The Sonix, Severe Zero, Peter Bruntnell, Small Town Mentality, along with filming and editing the award winning North Devon surf history DVD for Barnstaple museum 's surfing history exhibition. We did mobile friendly action sports edits for Chilli.tv , more VFX haircut videos for Studio 1A, filmed Creation fest outreaches and live bands at Oceanfest and more interviews and action for the Universe Inspectors documentary and Half-Life in Scotland. We worked on more DVD authoring projects including remastering Come Surf with Me for surfing legend Rod Sumpter and the start of our HD camera rental equipment with Redrock 35mm lens adapters and Nikon primes before video DSLRs came of age.

2007 saw more rental equipment, more filming at the WRC Rally championships, Equestrian events, Ladies Lacross at Sandhurst, Ladies Mountainboarding, Fat Face Night Air mountainboarding in Bideford and the creation of the award winning Think Tank DVD for Barnstaple museum. Half-Life edit was in full swing and colour grading on Zombies of the Night. We built a few ecommerce websites and did a lot of fashion photography for Lambland and Genesis surf shop.

2008 saw us get involved in more mainstream filming with Stu joining full time and Mark having to find extra wages! Half-Life was finally finished along with winning awards for Think Tank and Half Life this year we worked on edits for Fit Roads including Jeremy Paxman, filmed part of a vampire feature 'Rogue', more colour grading on ZoTN, green screen music videos for Saint Onyeka, we produced another SAS beach litter awareness film, filmed Analog surf contest and more visualise filming at the cricket in Bristol. We filmed for the Animal surf academy in Newquay and started 2nd Unit work on feature bippic Risen in Wales and won some cash in a US filmmaking documentary competition and yet more Universe Inspectors doc filming plus filming a promo for AXAR media to play out at CES in Vegas and a few website builds and more fashion photography for Genesis.

2009 saw us helping with a surfing cow, more promotional filming for Ecombat with their laser tag system, we filmed a music promo for Jim Jones, did more DVD authoring and disc production, filmed lots more documentary interviews for the Universe Inspectors film and did some editing for Dolby to play at IBC and CES. We started on DVD authoring projects for Two Four and provided filmmaking training to Bristol University PHD students as well as filming corporate presentations in Birmingham for Magnox and doing 3D model animation for DVD menus and more 2nd Unit filming for boxing biopic Risen in Wales.

We have chosen some of these projects and put them in the new format blog as individual items when there was a video that's still on Youtube. Many of the older project videos were uploaded at very small size due to bandwidth limitations for playback in this era, so these have been removed from the Archive. If you want any more information about our production services see our 'What we do' section and click through to the individual production blogs.