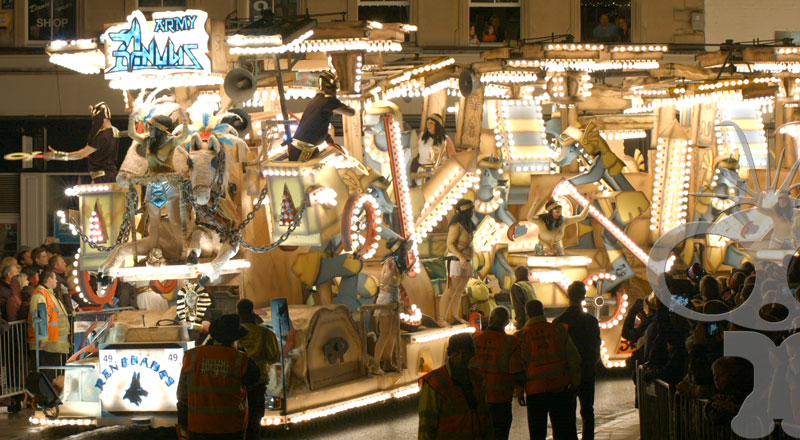 We are back in the office after our 3rd year at the Bridgwater Guy Fawkes Carnival, the largest illuminated procession in Britain, where we have been providing live filming & vision mixing services for the big screen in the centre of town.

We provided the cameras and crew to film the parade and broadcast the footage onto a huge screen. The vision mixing was carried out by us using an OB truck supplied by the screen providers. We also displayed live footage of bands playing on the stage and of the crowds throughout the day in the run-up to the big event.  We filmed using three cameras, one of which was a wireless roaming camera that we sent out onto the high street to capture the street performers.

On location were Mark, Stu, Matt and Phil with Mark operating the mixing desk from the OB van.  Light rain throughout the day didn't put off the huge crowds - thousands were in attendance! Mark also had the task of broadcasting text messages from the public on the big screen as well as live/archive footage & advertisements.

Our IT apprentice Barnaby created a special webpage which we were able to overlay onto the video screen. This page had a separate admin area allowing Mark to enter new text messages from the crowd and refresh the live ticker without the need to take it off screen. You can see this on the second image on the left.

We also tried out our Blackmagic 4K production camera as it was an ideal opportunity to see how well it could cope with the extremes of light & dark. You can see a full resolution 4k screen grab by clicking here - 4K image sample (1.6mb file).